Feedback on 20v20 crystal league - please share your own experience

Posted by glokz 1 year ago

I would like to write little bit about my experience with 20v20 so far. The goal is to ensure developers are aware of the situation and act accordingly if something is not as per their desire. Also, I'd like to reach out to the community that plays cgvg, mostly I'd like to hear out level1 teams because I believe there is not enough incentive for them to play level 2. As we can see in below screen, we have 2-5 matches daily on level 2, which is quite low number and more teams (like our) are pretty much doomed if the incentive to create more 20v20 teams will not be increased. As per my understanding - the whole idea about 20v20 CGVG was to open the content to more players compared to a city gvg mode. As it is fresh it is still pretty fine, exclusive but way more played and contested than 20v20 city gvg. However I feel the peak is already behind and the future will only decline the 20v20 team base. 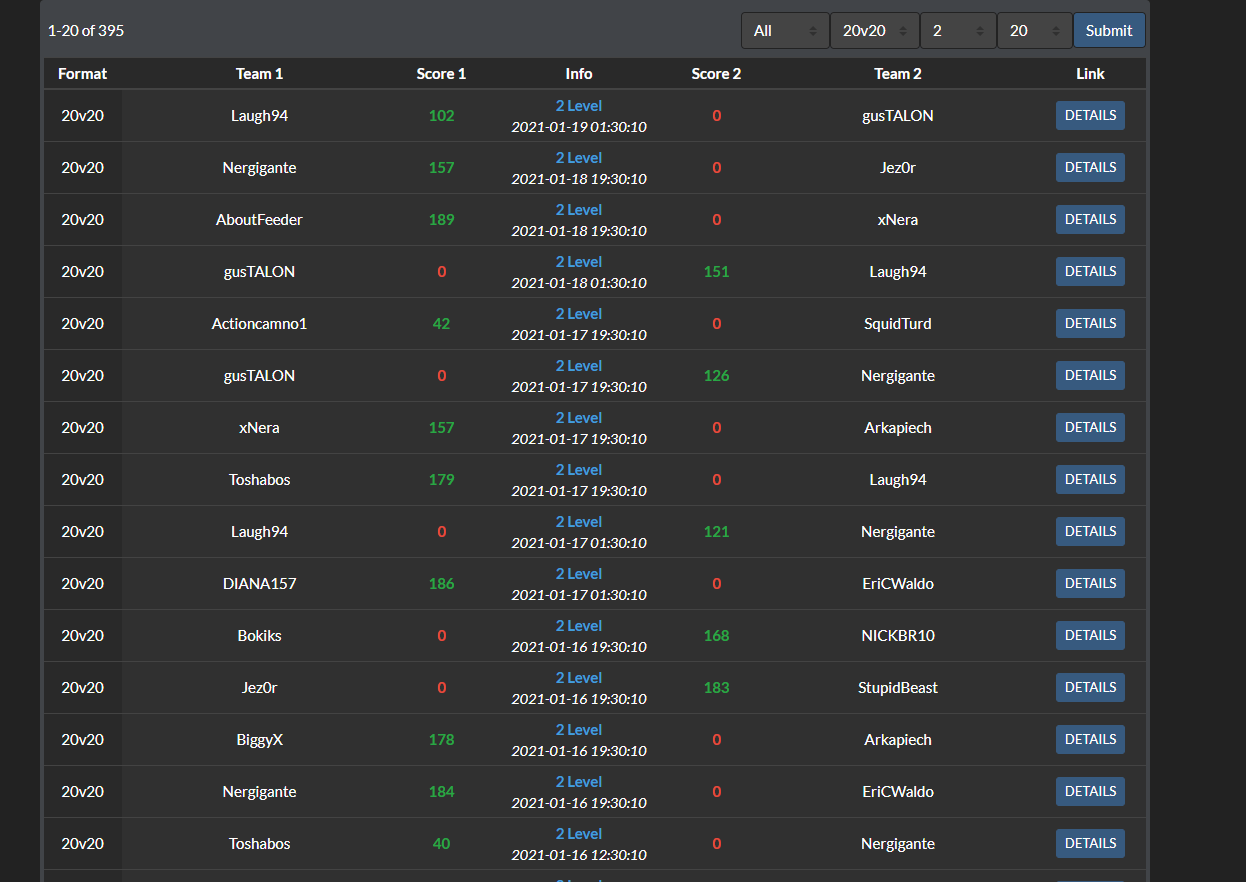 Let me start with short introduction of myself and my experience so far:

I am co-leader of one local guild - Avium, we are small guild having around 40-50 active players, no alliance, no territory just having fun with the game in a pretty unique way than most of other guilds in the game. We decided to heavily invest our resources into 20v20 league, being one of main content of our guild where we really challenge ourselves against other 'teams' in the game. I must admit - 20v20 is one of the best things that happened to Albion, all of our players have fun with it and I will support my guild's team as long as we have more fun than negative emotions about it.
So far we have played around 40-45 matches both in level 1 and level2, so 1/3rd of the most active players (source). Previously, 90% of our members did not have any experience in 5v5 cgvg above level 3, so let's say we start from scratch, even though most of our players have been active in open world pvp since the release. We have pretty much perfect winratio on level 1, except for the top teams that play level 2 and warm up on the level1. It is really important to understand we are not giving UP any time soon, we are actually doing nice progress. This post is my personal incentive as I am closely watching participation of guilds in this content and I could see already many teams that I thought will survive it, but only after a month they simply died not passing entry floor.

So to sum up, we are a novice local guild, that creates its own team not having any merc players, budgeting our team from guild bank (having 0 income as guild) that challenged itself to create 20v20 team and have fun with that content. So basically our story is probably explaining why only the best teams in the server can sustain and everyone else will stop playing sooner or later.

What is our biggest challenge in creating 20v20 team:

So far, out of 10+ level 2 matches we played, we've won three times. Two teams that we have beaten are already disbanded and one team is still in our reach however just like US, they switched to scrim more than actually play level 2. The only enemies we get are top teams created by international players, not even guild-based but more like inter-guild teams. Those teams have naturally evolved from City GvG teams and consist of the best 5v5 cgvg players. For us - contenders, it is really challenging to do steps forward having like 90% chance to fight against such a team in a full-loot combat, however there is no other way to fix basic issues and learn how to play the game on that level.

Possible solution:
Unfortunately the only solution would be somehow increasing number of teams/increasing incentive to play 20v20.

One idea would be having level 3 daily, that is covering level 2 timer, just like in 5v5. So best teams will get more rewards and more competition playing level 3, with higher IP cap and more risk. While level 2 would lower entry-level for the level1 teams while still being full loot. That could really bring some freshness and ensure this content will not die in few weeks/months as I do predict such lifecycle path ATM based on my personal experience.

Unfortunately that comes with a great risk of having no-shows, currently there are only few matches per timer, the risk of having no-show at level 2 is counted in dozens (XX%) implementing that would make it even higher. How to counter that? IDK, increasing rewards for no-shows in 20v20?? I don't really have perfect solution, just trying to throw random ideas here and there maybe inspiring developer or another community member to write something smart that would enable more level1 teams to play level 2.

Another very controversial idea, would be making 20v20cgvg alliance-limited. Which means you can't merc players outside of your alliance, making very strong inter-guild teams that are not allied because of open-world politic reasons (like abusing alliance limitations etc.) I won't really write a lot because that would bring unnecessary heat from such teams and I only want this content to be a success. I think that could little bit lower entry level and increase incentive for more guilds to participate in such content, plus would be another incentive to stay in a regular alliance instead of having mega-NAPs in the game.

IP cap on level 2 is 1100. Which means, most of the items are very cheap, except for avalonian artifacts which are currently heavily in the meta. Usually having a level 2 versus top team, with 5 deaths makes us die around 20-40 times before we give up. Usually we lose around 20~ robe of purity, hallowfall and other valuable items. Of course, many will tell - if you can't afford then play level 1. But level 2 is full loot and only having full loot gives you really the feeling you have won something or it was worth to invest so much resources and time to find yourself in that position. Non-loot combat is basically only a step to contest in full loot combat.

Approximate cost of refunds (not everyone apply for the refund) is around 20-25 millions per match. Which means, our guild that has completely no income has to support our team with 100m weekly. This would be completely different if the tiers were here, but even though including rewards from level 1 and those few level 2's we have actually won - we are bleeding money which creates the need of switching to scrims instead of participating in 20v20 level 2 daily. That itself will lower the match-number of levels 2 and increase no shows for the best teams as well. I understand that building 20v20 requires either winning or having strong economy backup (not really worth the season points as you are mostly losing due to the lack of tiers) but still, 20-25m is way too much to pay for this content daily for most of the guilds in the game.

The rewards do not really cover the cost of participation in level2 cgvg even if you go even (so let's say you both lose sets and loot enemies eventually winning). I believe only few teams do make money on this content and those teams play levels 3 and 4 during the weekend, not hard to reach out to them to confirm that.

What could be changed to lower the economy requirement to maintain 20v20 team.

One thing could be lowering price of T4 artifact pieces. Maybe shifting some IP from avalonian items so that lower tiered items have lower IP even though being avalonian items just like any lower-level artifacts/normal items. Currently avalonian items are used in cgvg, zvz, open world pvp, fame farm, avalonian farm, HCE so basically everywhere. I can understand it's part of 'income strategy' by SBI, but IMO cgvg level 2 costs way too much and is an impossible wall to jump through for most of the level-1 teams. Some of them already gave up some of them will give up sooner or later as they realize that. As this would affect whole game and SBI's silver sink it needs to be reviewed if it's even possible to implement.

Another ideas could be giving way more rewards for losing match, currently we get nothing for showing up, investing time in training, doing our best to contest against the best teams. And even my guild will survive this phase - it will deny most of the 'contending' level 1 teams to try themselves in level2 before giving up on 20v20. This comes with a great risk of having teams that would only sign up to cash out the 'losing reward', so there should be some additional condition to get it, like get 10 points or kill X players. At this point, I would like this idea to be consulted with best teams, to understand their situation in 20v20, maybe it's enough if they just collect every few days donations from guilds like mine. This point would really support those teams who are too good for level1 and too bad for level 2 like mine.

I think the effort to maintain 20v20 prosperous team is way higher than having multiple 5v5 teams. I believe 20v20 should be way more important in terms of season challenge, especially that everything else (including outpost fights) is dominated by mega-alliances atm. This could be really one of few places where small guilds stand chance against mega naps. So i believe we could little bit increase number of points collected in 20v20 cgvg, especially in level 2 battles. Risk vs Reward balance pls.

With this said, I encourage everyone to share their experience, especially people who already stopped playing or feel like level 2 is beyond their possibility (explain reasons why), even though they love the contend and would love to become a level 2 cgvg guild/team.


I hope this will be a healthy discussion, I know it looks like crying to many but if you read my above explanation I would only like to see more teams competing against us in level 2 matches! Regardless of the situation, see you guys in the arena!!!

Posted by Retroman 1 year ago (Source)

Hey, thanks for your feedback.

Just to give you a quick heads up we are planning to make adjustments and improvements to the 20v20 Crystal League in Season 12. However these adjustments haven't been finalized yet, so we didn't post anything publicly yet. But I just wanted to let you know, the we will iterate on how we can improve the 20v20 league and for exampl these two points are already pretty certain by now:
We will also review if the expected participation rate allows for more frequent higher level matches and go over the rewards / daily limits and see what other improvements we manage to get in.