Posted by H4n1baL 4 years ago

Today I want to take the time to announce some of the features and content that is coming with our next content update Percival. I also included an explanation for some things concerning today's patch at the bottom of this post. As the title already says, I'm gonna talk about the "Vanity & Customization" features as I am the game designer that is responsible for it.

The update will contain two main customization features and content that goes alongside these:
1. Character Customization
2. Mount Skins

I will explain in detail what the features are and how you can use them yourself, including some spoilerinos of some of the content that we're launching with them. Everything that influences the looks of your 3D character can be found in a new sub UI called "Appearance" in the "Player Menu" that you can open by clicking your character portrait or name in the top left corner of the screen. There you will find a UI tab for each of the two features Character Customization and Mount Skins.


Character Customization
Character Customization essentially means being able to change the looks of your naked character after you have created it + some new options to do that.
In the corresponding tab you will see a menu on the left that is very similar to the character creation menu where you can choose your hair style + color, beard style + color, underwear model + color and a new option: faces. These options will give your character more personality and help you differentiate yourself from others.
At the same time, a preview window opens in the center of your screen, where you can see all changes you make on the left applied to your character.
Once you've set up the character as you like, you simply press the "Apply" button in the preview window to see the changes on your character in the world. And that's it.
Never really liked that white beard you picked when you initially created your character? Now you will be able to change that. You can change your looks at any time, as often as you want, and from anywhere in the world. And the best part is: changing your looks is free.

You can also unlock additional customization options by spending gold. A gold cost means that players have a chance to get more unlocks simply by playing Albion and converting their silver to gold in order to purchase that new fancy hair style they want. Unlocks are account-wide, so you’ll only need to purchase it once to be able to use it on all of your characters.
To celebrate the release of this system, we're releasing a few new colors + additional hair, beard and underwear options for free, so everybody can use the new system when Percival goes live. We're looking forward to what you come up with.

But wait - there's more: To make your characters look better overall (especially when running around without gear), our wonderful Art Director has also given some love to the character and has improved the models significantly. I don't even dare to say it but for the first time they will have fingers!

Here's a sneak peek of the new character model including a new haircut, beard and underwear model: 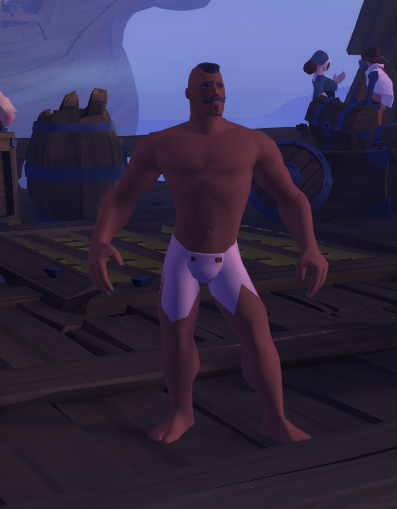 What does this mean? Per mount category you will be able to select one skin that visually overrides the corresponding base mount you have equipped. So if you're riding a regular "Direwolf" your skin selection for the direwolf category will be shown. If you're switching to a T6 "Armored Horse" the skin will be exchanged for the skin you've chosen in that armored horse category. For the categories with base mounts on more than one tier it doesn't matter which tier the mount that you're riding has - it will display the same selected skin on all tiers.

Take a look at the UI for the Mount Skin selection (WIP):

You can easily change a mount skin with a right-click or drag&drop and it will immediately update ingame.

Skins are permanent and you cannot lose them (not even if you die horribly in the blackest of black zones). Once unlocked you will always have that skin at your disposal. Just like with the character customization, Mount Skins are account-wide, so you can use your skins on all characters of that account.

Let's talk about the actual skin content, shall we? Alongside some completely new skins that will be purchasable by all players for gold we have decided to give a lot of old mounts a new meaning. That's why we will convert the following mounts to items that can unlock their respective skin when Percival goes live:

Cougars:
- Arena Veteran's Armored Sabertooth
- Sabertooth Rex (The mount that was given out to our Arena tournament winners)
- Recruiter's Tiger
- Recruiter's White Tiger

Until the update goes live, you'll be able to continue to use them as normal mounts, but they will still drop on death and may trash etc. As soon as the update goes live, the mounts will not be usable as mounts anymore! They will automatically be converted into items that you can consume from your inventory to unlock their skin permanently for your account. These skin-unlock items are tradable, but once they are consumed they are removed from your inventory (like a Silver Bag or a Tome of Insight) to unlock the skin for you. As said before, skin unlocks are account-wide, so all characters of that account may use your skin unlocks.

There's two mounts (Bonehorse & Morgana Mare) that aren't following the scheme described above. That's because they can only be crafted with an additional crafting ingredient (Necromantic Elixir & Morgana Mare Saddle). You will continue to be able to craft the mounts and use them. But they are also being converted into skin-unlock items with Percival. Additionally with today's patch we reduced the droprate for these crafting ingredients drastically (to around 10%) in random dungeons because when you drop one, it now essentially means that you found a permanent skin for your riding horse or your armored horse.

Also the guild colored armored horses are not being sold at the Vanity Merchant anymore, but they will make a return as skins when Percival arrives.

Mounts that have a spell on them (battlemounts, adventurer challenge mounts and others) are not converted into skins with Percival because it would have been complicated to see if a player is using a simple skin or the actual mount with a spell.

Mount Skins will have visibility options in the settings menu under a new tab. Per default, Mount Skins are always visible. But you can decide to hide mount skins of yourself, play partners or opponents to reveal their "original" mount in non-safe zones. The setup will look similar to this:
Show mount skins for yourself:
Always (Default)
Only in safe areas

To end the Mount Skins section here's an image of one of the new purchasable skins that we'll release with the Percival update: 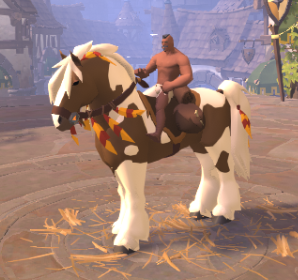 Today's Patch
Today's patch procedure was a little different than usual. We didn't put the patch onto the staging server beforehand, because a lot of these features that I mentioned above have big consequences for a lot of items which needed to be kept secret in order to protect players that own certain rare/valuable items from losing a lot of potential silver.
Of course we will return to putting our patches on the staging server ahead of time again to stay transparent with our upcoming changes.

So what actually happened today?
We cancelled all active sell orders for all mounts that I mentioned before and crafting materials for them (including the arena tokens). As I mentioned before - this was done in order to protect the players that currently have a sell order running for one of these items. If we hadn't done that, the players who first read this announcement could have bought the items for relatively low amounts of silver and then resell them for big gains immediately after without the original owners having a chance to react to it. We felt like it was the right way to save the current owners because of the potential price change.

Apart from that the mounts that are included in the list posted here are not tradable via the market anymore. This is another security measure we have taken in order to reduce the amount of people getting a bad deal with existing or new buy orders. The mounts remain tradable via direct player trade though. Once Percival goes live, the skin-unlock items are also tradable on the marketplaces again!
For the crafting materials, we only cancelled all active sell orders to make sure a potential new price can be set by the players. So these items remain tradable after the initial sell order reset.

I hope this post gave you a good idea over the possibilities you'll have to express yourself in Albion in the future and why today's patch procedure was a bit different than usual.
This is not the end of our plans for vanity & customization, but rather the first step. We have plans for other features and plan to roll out more content over time.
Do you have any questions, feedback, suggestions? Leave a reply here and I'll try to answer as soon as possible.

Posted by Korn 4 years ago (Source)

So, I repeat. Easy fix would be not to transform mounts automatically to tokens. But instead, players can choose to make the switch if they want.

That would indeed be a way to address this issue. However, from a development point of view, we'd absolutely want to avoid this as it creates a possibly permanent edge case / legacy issue with the way mounts are handled. There is a very high chance that every time we make changes / adjustments / improvements to the mount system going forward, we'd have to consider this special case as it might impact certain things, with a significant chance that it creates extra issues / effort. Also, there would be either weird side effects, such as us getting lots of reports of the "turn of mount skins" feature not working correctly, etc.

The changeover from the current Albion specific "vanity mount" system to the new skin system is indeed not without flaws. The good thing is though that the new system is what you'd consider a "standard" skin system as it's being done by almost all games, with the benefit that it is easy to understand, easy to work with and easy for us to expand and feed content into it. I'd argue that had we used the new system right from the start, most people wouldn't see an issue with it. It's the transition that is not ideal, however, I'd argue that the end result - having a clean skin system that fits well into the game and is easy to handle (also from a development efficiency point of view) - is worth it.