Planned changes to Realmgate in preparation for Season 6

Posted by Evoque 3 years ago

Towards the end of last year and the start of this one, we have been following your discussions regarding Alliances and how to best react to your feedback before Season 6.

We're aware that the current Alliance situation is dissatisfactory to many players, but we feel it's not as simple as "make every effort to completely remove alliances" either, since this has been met with a heavy resistance from the community as well.
So although we would first like to try fixing this issue on a fundamental level, we are all on the same page that something needs to be done.

Right now, the current Caerleon Realmgate allows players to get swift action and move around the map very quickly. This also creates a huge power projection, where you have a large Alliance that can be pretty much everywhere in the world on very short notice.
What also makes this even worse is that you don’t always have to be out in the world all the time to create this effect we see, since it’s theoretically possible many players may not even try to engage these large alliance battles.

Our current view is that we need to create ways to enjoy Albion's endgame without having to be in a huge Alliance, and to create room for smaller Alliances and Guilds to exist.
In our opinion, this can only be properly resolved with a geography change, but that doesn't mean we have to wait for a big rework. Our mid-term plan is to modify the way the portal system works to make it harder for alliances to be present everywhere in the Outlands within a few minutes. 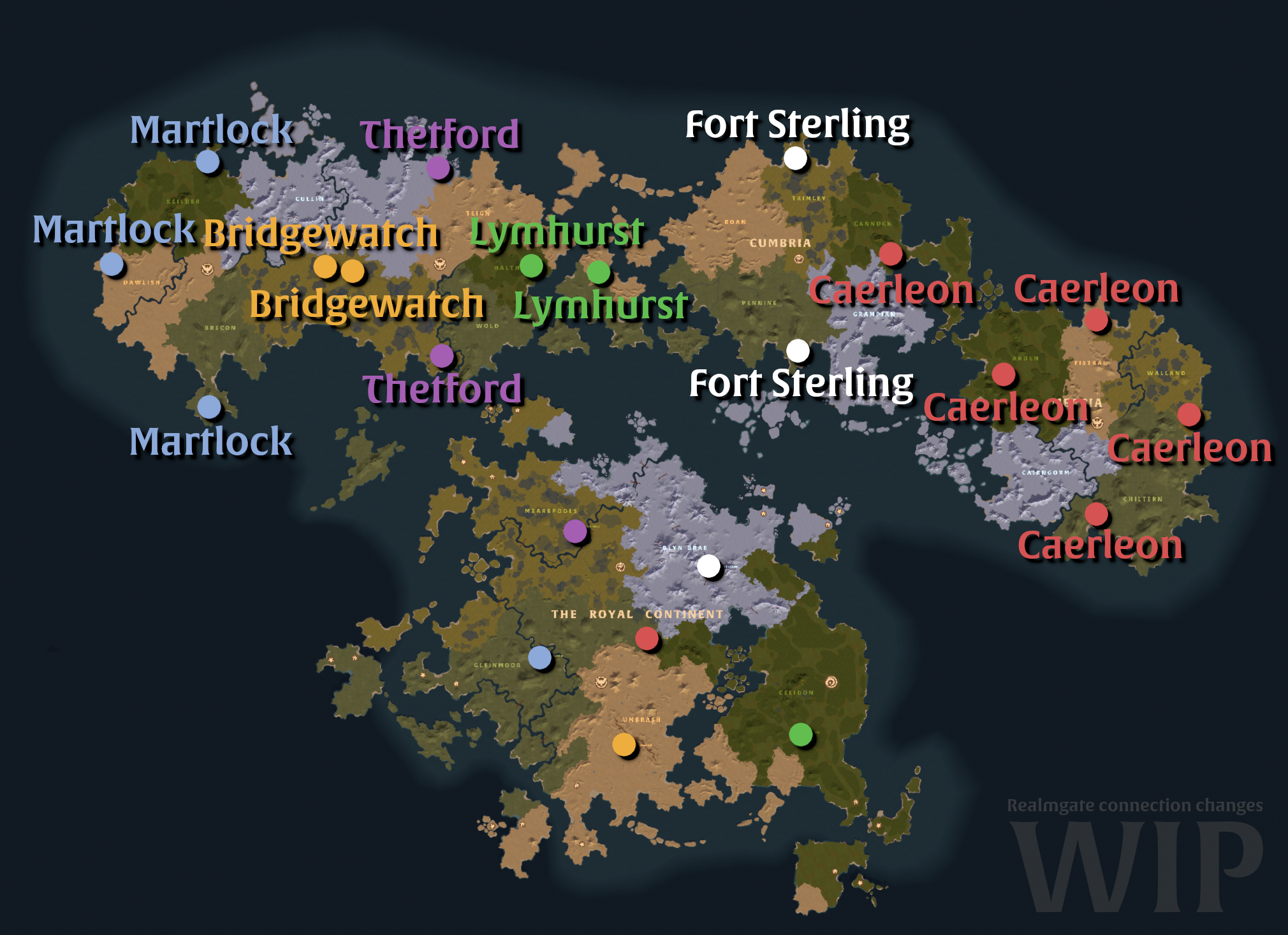 Our primary goal is to test our idea of creating more physical distance between the fighting guilds to create niches in which small and medium guilds can exist without facing the largest guilds all the time. The new portal system encourages guilds to choose one out of six cities as their base, so they gain some control over who they wish to compete with.

A note on biome preservation: of course it would be great if each royal city connected directly to portals of its own biome. In the current map layout, the biomes are heavily spread, however, so each city would gain access to multiple parts of the Outlands. This contradicts the key idea we want to be testing, so we've opted to prefer locality over biome preservation. While this certainly does not create as many economic trade incentives between the cities as it could, we believe the activity of the different guilds in each section of the Outlands will create interesting business opportunities nonetheless. We would certainly be revisiting the biome connections of each royal city in future.

We look forward to receiving your thoughts and feedback, and I would like to take this opportunity to wish you the best of luck whatever your plans are for this final invasion weekend!

(p.s. more news on Oberon will arrive next week ^^)

Posted by Korn 3 years ago (Source)