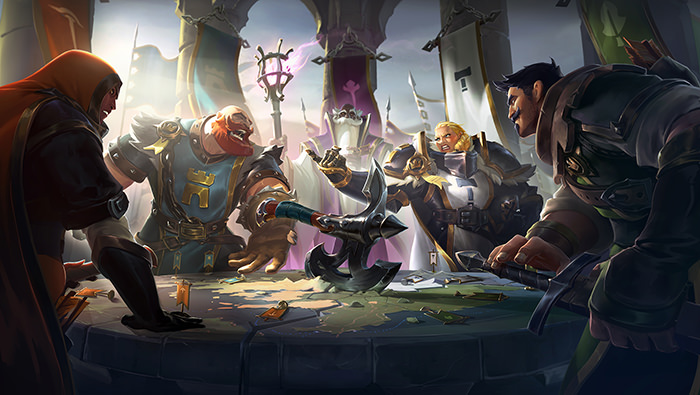 Merlyn, the fourth major post-launch update for Albion Online, is now live! This update brings the new Faction Warfare system to the world of Albion, along with numerous other features, improvements, and changes.
And to celebrate the occasion, we're giving all players a 25% fame boost for one week! Just log into the game between now and August 6 at 10:00 UTC and you'll automatically get the Mists of Albion buff, which gives a 25% boost to gathering, crafting, killing monsters, and all other activities.

Whether you're new to the world of Albion or a seasoned veteran, Merlyn brings features, improvements, and optimizations for everyone. Here's an overview of what's coming:

Faction Warfare
Join one of five factions based in the five Royal cities to participate in open-world warfare, claim enemy outposts, partake in dangerous trade missions, and earn valuable rewards.

Refining, Crafting and Resource Updates
Each city on the Royal Continent now has its own unique refining and crafting bonuses, offering new economic opportunities for traders and crafters - and resources have been redistributed to encourage travel and transport throughout the world.

Marketplace UI Improvements
The Marketplace UI has been completely overhauled, and two new features have been added: a clearer average price display based on actual sales, and in-depth sales history for each item at a given location.

Want the full details of every single feature, improvement, and change coming with the Merlyn update? You can view the complete changelog here.

@PrintsKaspian the base resource return for personal islands was changed to 0% 37% when I checked the test server yesterday... was this reversed at the last minute?


I am not sure what you mean. For non-bonus crafting/refining on island it should be 0% (37% with crafting) on live.