The Voice of Albion: Shaun Lawton

Voice actor Shaun Lawton brings a stately presence to the world of Albion.

The Voice of Albion: Shaun Lawton 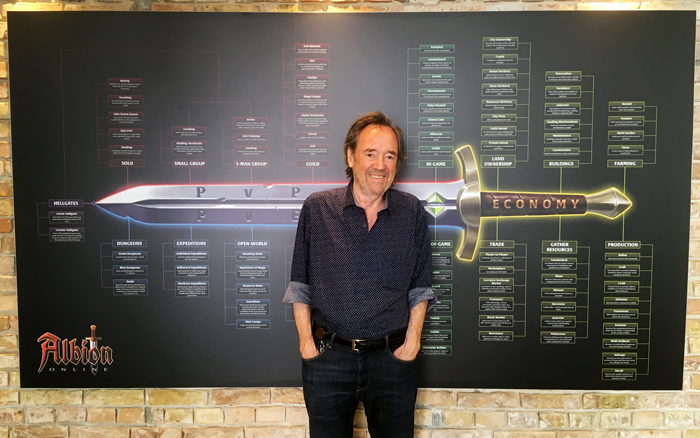 Over the past several years, the Albion Online community has come to know Shaun Lawton as the "voice of Albion". He has narrated numerous trailers and video features for the game since before launch, with his distinguished voice becoming an integral part of Albion's identity.

Shaun has had a rich and diverse career: after coming to Berlin in the late 1970s for what was supposed to be a six-month stint, he decided to stay, and has lived here ever since. Film and television roles soon followed, spawned by contacts in the close-knit West Berlin theater community. Throughout his decades in Berlin, Shaun has found himself particularly in demand as a voice actor, and as a native English speaker capable of numerous accents, he has taken on both English and German voice roles.

Among first voiceover roles for Albion Online was the Demon Prince highlight video from 2015, where he voiced a hapless adventurer unprepared for what he would face:

In early 2017, he narrated the pre-launch "What is Albion Online?" trailer, which set out the major focuses of the game: the player-driven economy, a "you are what you wear" system, intense combat, and guilds and territory ownership. The video has introduced countless players to the world of Albion, and to date has nearly 3 million views.

With the launch of the game in July 2017, Shaun added his voice to more videos, including the game's introductory cinematic. Since then, he has narrated numerous Albion videos detailing game systems and new features.

We recently caught up with Shaun to discuss his decades of experience as a voiceover actor, his recording process for games and animated shows, and how he first came to acting.

I've done other voiceover work, like School for Vampires and other animation stuff, where I'll do the voice and they draw it in afterwards. With videogames, I often do lots of different voices to cover various characters. As long as there's enough time between hearing them, you couldn't tell they were all me.

What is your process when you work with Marie (Havemann, Sound Designer)? How do you go about a recording session?

She's good, as a producer, which is very helpful for me. I can do any type of voiceover if people can work with me. Often I do many takes, and I start off at the beginning with something like I think it should be. And I go around in a big circle, and come back to where we started - or close to it, anyway.

How did you first get into acting?

When I was twelve, one of my teachers was planning the school Christmas play. I stood up to read from the script, she picked me straight away, and I got to play Joseph.

I was born in a mining town originally run by Quakers, so there were no pubs. But we had a band hall, and we would do pantomimes... So I started playing around, and got into comedy. And coming out of a wartime childhood, I was really stuck in that life until I was about 29, when I went down to London. Going down to London was to find myself. I didn't know I could do acting or anything like that, the idea was just to find something.

After moving to Berlin, your approach was to work hard but not force things - to let work come to you organically. It's interesting you've found yourself involved with the games industry, which didn't even exist (at least as a possibility for actors) when you first arrived.

I'd never thought to use my voice when I was still in England. It first came up when I moved to Berlin, performing on stage, and then people needing voiceover work for various technical jobs, things like that. I do whatever comes my way. I don't go looking for game voiceovers, but a lot of them have come my way, which for me is reassuring.

How has voiceover work changed over the years? Before it was always reel-to-reel, in a recording studio; now it's all digital and you can record almost anywhere.

I recently did a session for Hyundai in a studio in Berlin, with another studio in Stuttgart giving me instructions. In the beginning, years ago, a lot of work was lip syncing on tape loops, having to quickly learn the lines and get them right while looking at the screen.

I imagine it's a very exhausting, almost athletic process.

I can be tired, but then I get into the studio and my body wakes up. Same with acting: you have a bad night and only sleep for four hours or so, but you go onstage and your energy comes back. Sir Lawrence Olivier, just before he died, they would bring him from the hospital... and as soon as the lights went up, he was Olivier again, he'd come back to life. Sometimes you'll start a session feeling tired, but when you're there it's your responsibility, to yourself and others, to find a way to bring the energy.

If I'd stayed in the north of England, I'd have been retired for years, and my hair would be whiter than it is now... I saw all my colleagues looking like that 40 years ago, and I thought, I'm not going to stay there. And I can carry on doing this now, and the energy is still there. And that's a good feeling.

Check out these classic and new Albion clips from Shaun: