After a stunning comeback, Team Casualty rallied to win the third GvG season and spoil Money Guild's hopes of a third championship. 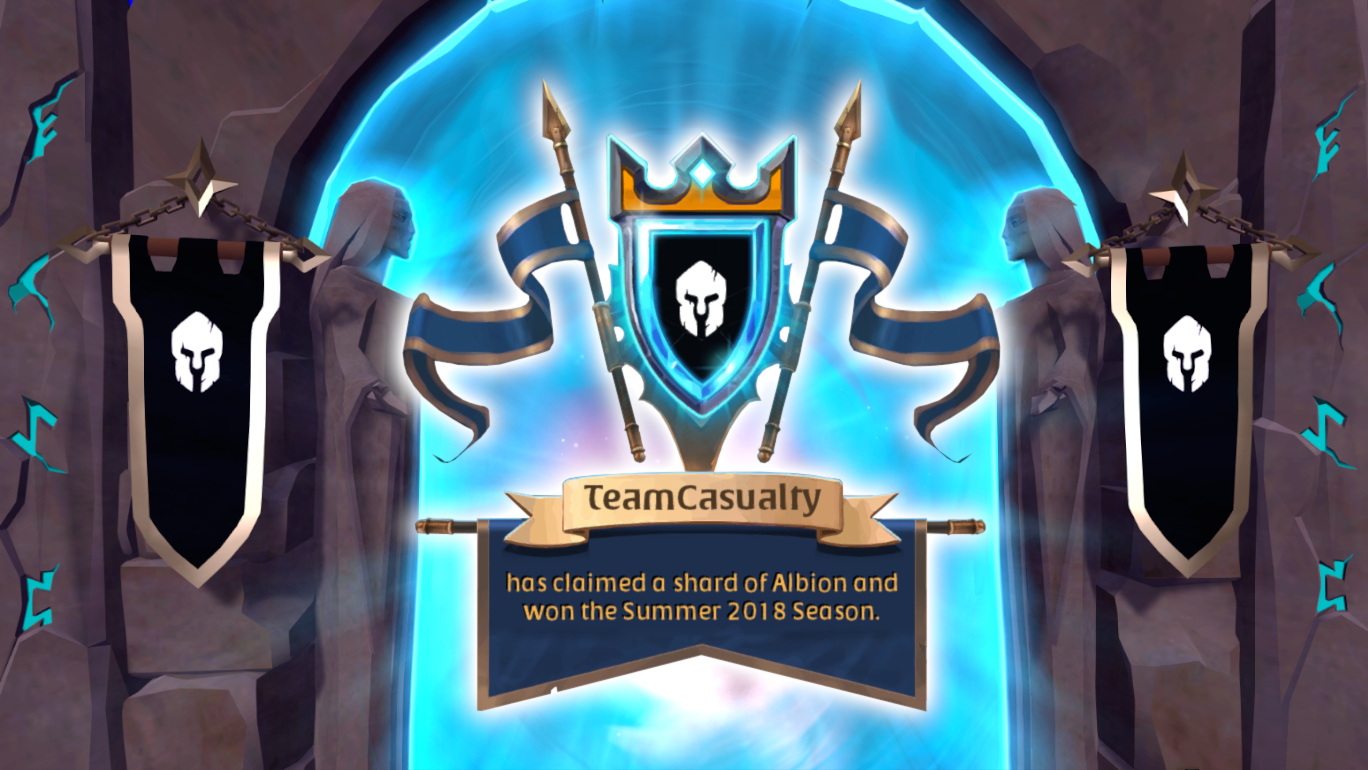 Midway through Season 3, Money Guild and Team Casualty were neck-and-neck for first place, with Team Casualty trailing by just a few thousand points. Then, in early August, they experienced a devastating string of events: in a single day, their alliance was disbanded, five of their owned plots were dropped, and massive amounts of gear that had been stored in Fecund Mound Meadow were lost.

Rather than give up, though, they immediately formed the new POWER alliance and began to reclaim territories, clawing their way back into first place. For the remainder of the season, they rebuilt their armories, dominated the battlefield, and racked up hundreds of thousands of points, eventually building to an insurmountable lead and securing the win. Money Guild's hopes for a third season championship were dashed, and Albion had a new champion. 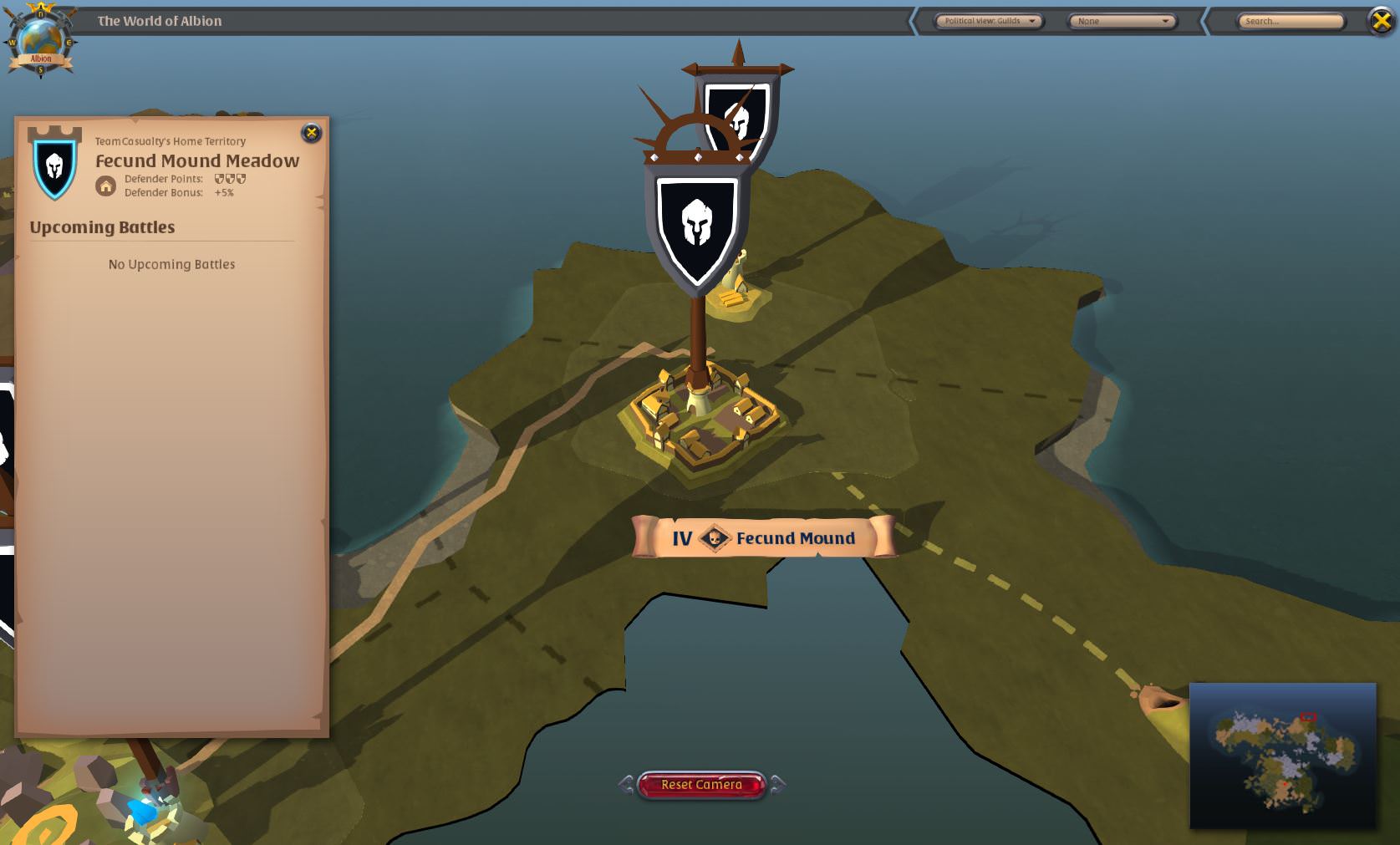 Team Casualty has been around since launch, and currently holds numerous all-time records: highest overall Fame, highest total kill value, highest resource value, and most Silver collected. Thanks to a powerhouse performance over the past months, they can now add "GvG Season Champions" to their list of accolades.

Head to Caerleon to see their guild banners on display, and keep an eye on the horizon: GvG Season 4 starts on Saturday, September 29, when new armies will rise to claim the throne. You can watch all the action on the official Albion Online Twitch channel, AlbionTV.

Coming from the low of having lost everything, you are now at the high of winning a season! What and who kept you together during that time and motivated you to come back even stronger as POWER?

When Fecund Mound was dropped, most of our leads that were online, Purr, Ellipses, and myself were occupied with guild activities, raiding Mercia mages looking for some ZvZ content. It took us by surprise. Everyone shared the same consensus, "We're done. We had a good run boys." I quickly rallied everyone into the opposite mentality; I assured everyone that we would be ok as this was not the first time something like this had happened. And Ellipses believed in TC too. From there, we instantly launched a GvG campaign into Mercia as OOPs was harboring Bangers. We were looking for war and they were the juiciest target.

The members of TC were ready to be rallied too, many taking the initiative to support the guild in whatever way possible. We had a few men make considerable silver donations to help keep us afloat when this all went down. Donations of note: Xtrion - 200 mil, Thesipher - 100 mil, X3p - 50 mil, Saicere - 300 mil, and others as well that I can’t recall but all appreciated. No contribution was too big or too small as they all helped to boost morale in the guild. Ellipses, Pleb and men like Lebron quickly rallied the men daily into mage raiding to keep us busy while we rebuilt. Also, I’d like to give a shout out to all our strong officers, and give thanks to men like Ellipses and Pleb for all the time they put into building and rebuilding TC.

What is the secret to your ZvZ success?

In my unbiased opinion, we were weakest this season in ZvZ than we have ever been. That said, we did manage to crush the OOPS/OOF/POE alliances pretty consistently, with only real challenge coming from Blue Army (Boys are bangers for sure).

As far as secret goes, there's really not one, it comes down to the members of the zerg being able to listen and promptly respond to zvz calls, few men like Sohrab/Youni/Djtanner/Millicent were our more consistent DPS in those zergs, constantly being in the right spot at the right time. Also we have solid shot calling from, in my opinion the best shot caller i've seen - Ellipses, and of course Pleb contributing with his ever so soothing voice.

When asked whether he regarded Crimson Imperium Reborn as the biggest threat in season 3, Ellipses said: "No, not at all. Anyone can look amazing when they beat down on last season’s champ. People often forget that for the entirety of Season 1 and the majority of Season 2, TC has held off and repeatedly crushed CIR’s teams.'' Do you stick by this general opinion, and did you feel threatened by CIR at any point in Season 3?

For the most part no, CIR never was a factor for us, as they mainly stuck to their EU time zone in this season, we rarely got to meet them. They were more of a threat to our EU allies - The Fleet and Frogue One.
Cargera in my opinion is the best tank to ever play Albion and carried the load for them, but when they removed Licitank from their team last month, their team got blatantly weaker, Genov and Derrick are not quite Licitank quality. Even though we have been at war with POE for longer than I can remember now, I do have respect for those boys, they are the longest running 5 man team (or were) this game has seen, that in itself is an accomplishment.

Without giving away too many tactics or strategies, can you share any of your goals for the upcoming Season 4?

We're not too sure what our season goal is, with the current state of the game season play is rather stagnant. We'll probably end up going for a more casual route this season though, we plan to shrink our alliance/guild, rebuild with the idea of not needing a mega alliance (truly super boring). As it currently stands though we won't be competing for a Season 4 victory, we accomplished what we wanted to this season.

TC has never really had a plan in its 1 year of live gameplay, we always just kinda do stuff as it happens, so we'll approach Season 4 the same way.

Lastly, I want to thank everyone in POWER and TC during Season 3 for all the hard work, special thanks to men like Djtanner, who manages all tc food/farms basically by himself, Eveneska and Kyzara who spent countless hours managing gatherers, big thanks to our gvger's, Mumuzao team/Jemenex team/Tringle team and masterofwaves/our 6th man Rxhmorse, specifically the "a" team that carried the load for so long (Sohrab/Ellipses/Sipher/Akko) and again, thank you to Ellipses and Pleb, without you men, we wouldn't be here, you guys were the backbone of TC for so long.

Check out TC's own victory video below (warning - strong language):

Here are the final Season 3 rankings, with total points earned: