While the armies of Albion sharpen their weapons and refill their stocks in preparation for Season 6, we chatted with one of Blue Army's lead shotcallers about his approach to guild warfare.

As a player since the early betas, Sucks (real name: Chris) has extensive experience in group PvP, and has played a big part in every winning guild's #1 place from season 1 to 5.

Currently one of the lead shotcallers for Season 5 winners Blue Army, he also plays numerous other roles within the guild, which include coordinating BA's legendary ZvZ teams and making sure the major guilds of SQUAD are all on the same page. With another victory in the books, we spoke to him about his approach to the game and guild warfare as we lead into season 6.

According to Robinhoodrs - guild leader of Blue Army - Sucks' involvement in 4 out of 5 season winners is no coincidence:

"I believe it isn't pure coincidence... his ability to lead the men and women of a guild and alliance to victory on the battlefield while maintaining a very open and approachable personality plays a massive role in his season wins. Seeing what his enemies are planning and getting the zerg to counter that play is a huge part of Sucks' ability. Hyping the zerg up, getting the blood flowing and everyone having fun while we slaughter our enemies on the battlefield is an awesome feeling that not many shotcallers can reproduce. Do I think Sucks will take another win for Season 6? Hell yeah I do! I can't wait for Blue Army's third shard on our flag."

Congratz to you and everyone in Blue Army for taking the top spot in Season 5!

Your guildies and many other players refer to you as one of the best shotcallers in the game, with your exceptional ability to predict your enemy's actions. How did you develop this skill? Do you have advice aspiring shotcallers who also want to follow this path in future seasons?

There are many good shotcallers in the game, Blue Army has a lot of them and we all develop the skill the same way, by practicing. Blue Army never runs from a fight no matter what and that's because every time you fight a ZvZ and lead people and assume that responsibility you become more qualified, a better Zerg leader and acquire more situational awareness. The main advice I would give is to just keep practicing by looking for fights and to look inwards for mistakes made instead of placing blame on your members. 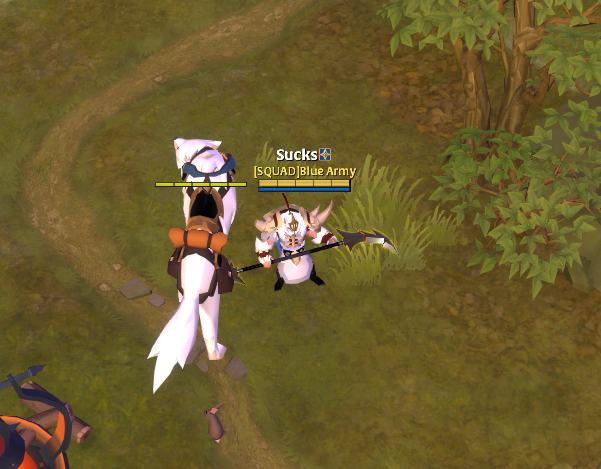 What are the earliest telltale signs that an enemy team is about to engage on you?

Normally, as you are observing the enemy front line and seeing what the tanks mainly the enemy shotcaller is doing, for example preemptively using his Knight Helm for example as well as seeing how they are moving. In addition, some shotcallers become anxious and want to engage, and they start making mistakes without noticing. All these things signal when the enemy zerg is going to engage. With more developed and rounded zergs you can also watch their CORE DPS players and see when they are gaining stacks, which usually gives you a hint on what they are preparing to do.

What are the first thoughts that cross your mind when you realize a team is about to flank you?

When an enemy team is about to flank the first thing that crosses my mind is: what is the best way to put my zerg in a better position while taking the least amount of casualties (or none, if possible) and still win the fight. Sometimes it's repositioning the whole zerg, other times it's engaging on one side hard enough to disrupt them so that we can then turn back to our other front.

Orchestrating a large-scale fight and having it go to plan is no easy feat. How do you get the best out of the group you’re leading?

Whenever we are fighting everyone knows when it is time to be serious and pay attention so that the results always go in our favor. During a fight everyone starts focusing and starts listening to directions. You need to build a good relationship with your members - this normally entails respecting your members and listening to their feedback so that in turn they listen to what you are asking of them.

What is the environment like in your voice comms (discord) when you are leading a group?

Whenever we are on voice comms we are always laughing and having fun with each other until we go look for a fight or until a fight starts. The Blue Army community operates as a family and that is one of the main reasons we are so dominant. We trust each other and rely on one another. Comms become serious and quiet with minimal talking and interruptions when a fight breaks out so that clear direction and information can come in and out.

What is the single most important thing that drives you to play this game? Could you share it with us?

I love playing with my friends and the BA community is the reason I keep playing. I enjoy interacting with every member on a daily basis and we talk to each other about everything, whether it's real life or game related. The environment that we have in BA is the same environment and interaction you would see between real-life brothers.

Despite facing such direct resistance this last season, how do you think you managed to come out on top again? Did you ever at any point believe you would be overthrown?

We have always faced many enemies and alliances as a single alliance, and the only thing I can attribute our successes to are our members, all the way from guild leaders to new members who play this game every day with one goal only: the improvement and well-being of our guild. We have officers who wake up in the morning making sure the guild is running properly to members who participate in fights as soon as the call is made. This is the sole reason we won the season.

Do you have a favorite moment from season 5? Could you share it with us?

My favorite moment of season 5, apart from some of the intense fights we had outnumbered and won, is waking up to that message at the end of the season saying that Blue Army won and seeing our statue and banner as you are zoning to the realmgate and knowing that our members are seeing these things and are rewarded for their hard work and commitment to the guild.

Which guild or alliance do you have the most respect for and why?

There are many alliances I respect, but the one who plays with the most honor and dedication after SQUAD I would say is EGO, because I have worked and talked with Torthur from when he was In OOPS with me in the first season. He leads a good alliance and is a hard worker who is also dedicated to his guild.

Do you have any shoutouts you would like to do for special contributions to the alliance during s5?

Apart from Mojo and Pareille who are the GMs of the guild and built this amazing guild for all of us to play in... I would have to give a shoutout to all our officers who work harder than anyone I have seen in the game. Special shoutout especially to Yukisk who somehow manages the guild while going to school and work. And of course, shoutout to the other officers who put it in a lot of work such as Mrflako, Money, Mayweather, Zemletruus, Dayzu, Skulkesnuppa, Sllice, Sageleaf, Gugusteh, Groglor, Wolfynko, Casukito and LAST BUT NOT LEAST NIGHT who is in charge of shotcalling and all Regearing. I also want to give a shoutout to the Made in BR leaders Artista and Hopeweed who have built a strong team, and have showed great potential and results as a strong zerg (and great allies), as well as to Sohrab and his GvG team and the rest of the GvGers in SQUAD who spend hours fighting 5v5s over and over to put us in a better position.

Most importantly: thank you and the biggest shoutout to every Blue Army and Blue Army Alt who drops whatever they are doing in game to come and help whenever help is needed, they are the real MVPs.

With all the changes to the portal system for season 6, do you have any expectations on how this may affect your overall strategy as a guild?

Yes, we have worked on many strategies to deal with these changes and we have many different plans to optimize our guild's content leading into season 6. One thing Blue Army is good at is adapting to changes and making sure we have the strong foot walking forward.

Who if anyone, do you consider to be your greatest threat in season 6?

I truly believe that while there are strong guilds and alliances such as KFC and EGO out there, with this Blue Army community that we have built, it will be hard for anyone to compete against us. And if we do decide to go for another win this season it won't be a problem for us to achieve it.

Last thing I want to say for the boys is: Squaaaaaaawk!

Want to nominate yourself or someone else for a spotlight? Whether you’re a  shotcaller, island designer, Right Hand, expert gatherer, fishing champion or avid collector ... we would love to hear your story! Get in touch with us via the forums, Discord, or Twitter!