The year is 2017 A.D., Dauntensea is occupied by the Russians. Well, not entirely… One small guild of indomitable Gauls still holds out against the invaders. This week’s spotlight features the francophone guild Les Gaulois. I met with Kunmoe, one of the guild’s warmasters, to talk with him about his guild. Kunmoe was chosen by his guild to relay all of the members’ voices and he did a great job doing so. Enjoy!

One Guild, One Purpose, One Surprise

When MonkeyFR, guild leader of Les Gaulois, first entered the world of Albion, he quickly understood that it is more than difficult for a solo player to survive in the harsh and competitive environment of the game. To overcome this barrier he decided to create a guild with the single purpose of working together with likeminded people, instead of trying his luck as a solo player.

Today, the former convenience guild has grown into one of the finest guilds in Albion. While most of the members are French, francophone gamers from all over the world have joined their ranks.

The leadership of the Gauls decided to take a more flexible approach on the guild’s central decision making. While making the decisions lies in the hands of MonkeyFR and his officers, any major change or step is published to the whole of the guild for feedback and input. Through actions like that, the Gauls are trying to unite their guild as much as possible. Cohesion and human values are more important for them than pure efficiency. They understand that their system, especially in terms of reaction time, is flawed compared to “military like” guilds such as Red Army or War Legend and yet, to be able to keep their principles, they are more than willing to accept that, as Kunmoe expounds: “We are all equals and we refuse to sink in a pyramid system where a couple of members take advantage of others to stay at the top.”

The Gauls have become quite an effective running machine and thanks to the maintenance of their specialists they keep increasing their productivity on a daily base. While every Gaul is doing his share to keep the guild rolling a handful of people are sharing a bit more. First, we have the two brains of the guild, MonkeyFR and InsaneDayD, his second in command. While MonkeyFR has the ability to find a solution for any situation, regardless of the complexity, InsaneDayD is the one that is capable of inciting the whole guild to reach for higher goals again and again. He was the driving force behind the recent success of Les Gaulois’ campaign around the area of Dauntensea.

Secondly, we have Marsch and Atikin as well as Shinhe, Atalaka, and Wildsaoul. Marsch and Atikin are the guild’s elders, their wisdom and knowledge and their commitment in integrating new members are keystones of the Gauls’ recruitment and training. Changing from the sacred to the profane, Shinhe, Atalaka, and Wildsaoul secure the guild’s infrastructure. Horses, city plots, gathering, planning and building – just to name few aspects, those guys have their hands in.

Last but not least, we have the military section of the Gauls. Kunmoe and Tetenne, the two warmasters of the guild, are leading Les Gaulois from one victory to another. Both are supported by the guild’s own intelligence service - the I.S.G. - which is led by Narym and Alexscott. Thanks to their work and theory crafting, the warmasters are extremely well informed when it comes to their enemies’ strategies or rosters and the scouting of the I.S.G. allows them to gain the upper hand in the open world combat. One Step After Another

Starting humble, Les Gaulois always grew with their success, not only in size but also in their goals. The initial goal of surviving quickly shifted to the intention of creating a strong and lasting community that is capable of entertaining its members. With a selective recruitment system the guild always tries to increase their quality with fitting and active members which, in the end, resulted in the currently competitive area the Gauls are standing. “Our final goal for the Final Beta Test of Albion was to take part in the domination of the area around Dauntensea. Today, we can proudly say that we achieved our goal!” Kunmoe states.

It was a long and stony road they had walk to achieve that goal and a major factor for their current strength was their ongoing war with the Elder alliance and especially The Solar. Both guilds used the quantity and the quality of their war to rapidly improve their members and tactics. Quickly adapting and shifting from one strategic approach to another forged both guilds into effective killing machines. And while The Solar was able to take the upper hand at the end of their war, Les Gaulois is looking forward to cross their blades with them again at the release of Albion. Another strong enemy that helped shape the Gauls is the Codex alliance, an alliance the french guild was initially part of. “Sometimes the ally of yesterday becomes the enemy of tomorrow. Since we left the alliance, there is a certain animosity or hostility between us,” Kunmoe explains. Roughly one and a half month into the Final Beta, the Gauls found themselves in a slump with the need of allies, so they joined the Codex alliance. However, Les Gaulois were not d’accord with alliance’s decision-making. According to Kunmoe: “We disagreed with the organization. The alliance was expanding too fast, not taking the appropriate time to integrate the new guilds. In addition the internal power struggle between Hostiles and Garde de Khanduras were taking the decision for us: We hate fights like that and we felt that the alliance didn’t match with our own values anymore!” With a grin in his face he adds: “Today, we are always happy to meet our old friends on the battlefield as they are sweet and quite tasty.”

To test everything they learned until now, Les Gaulois launched everything they had with the goal to capture Cryptsunk March Wyke (in the hands of The Solar), while securing the entire surrounding area. Starting at Ragdrift March, they peeked into the continent and once the right occasion arose, they struck Nightcreak March and Stillpool Swamp to fortify their position. Instead of rushing things, they even claimed two given up territories from ZORN (Graspleg Swamp and Gangrene Sump) before launching their forces against the home base territory in Cryptsunk March. This was the moment their war against The Solar reached its peak. While the initial attack went smoothly, they soon had to split forces as their enemy relentlessly launched one counter-attack after the other. In the end they managed to drop the Wyke down to a single Defense Point combined with a 20% bonus. “We tried to conquer the village for almost one and a half month. We put all of our forces into that offensive but we were never able to win the final fight for that god damn village. The gear difference The Solar managed to achieve, in combination with their latest tactic, forced us to fall back,” Kunmoe states.

Instead of sulking about their defeat and the loss of some territories to The Solar, they simple changed the direction of their advance to the northeast of Dauntensea, where they fought and met their current alliance. The new campaign quickly came to a hold due to the diplomatic approach of the BF alliance, which Les Gaulois ended up joining. As a welcoming gift the Gauls took reign over the home territory of Deepforest Grove, their current headquarter.

As of writing, Les Gaulois were removed from of the BF alliance. Les Gaulois have received no further information and are investigating the reason for their removal.

Reaching for the Stars

Thanks to the efforts of every Gaul, Les Gaulois was able to heavily reinforce their core… but for them this is only the beginning. The guild plans to permanently secure a place on the chessboard of the territories in Albion. “Our next step for that goal is the creation of at least four competitive GvG teams which have to be capable of competing against the strongest guilds of the game. We will make sure to get stronger and stronger and we will take our slice of the cake!” Kunmoe gives a small insight about the future of the guild.

As always, the last part of the guild spotlight is reserved for the final words of the featured guild. Here is what Kunmoe chose to say:

“I could start with things like: “If you see a Les Gaulois on your screen, run or die!” or with facts like the fact that we are brewing the best beer in the world of Albion Online. Another option would be to quote basic tips from Surviving in Albion Online e.g. #1 Never try to gather or farm in a Gauls territory. But instead I want to thank all of our members for the hard work they put into our guild: Thank you, any of you is most important to us!”

What are your experiences with the Gauls? Have you fought with them, or even against them? Share your thoughts and your opinion on the Les Gaulois with us in the comments below or on our forums! 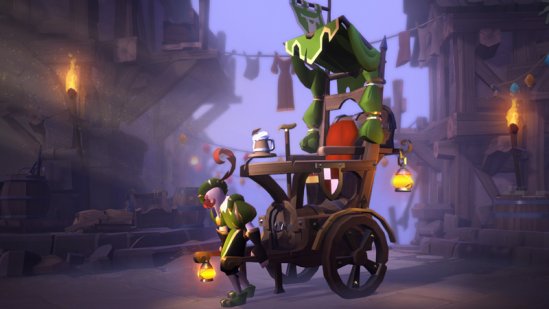