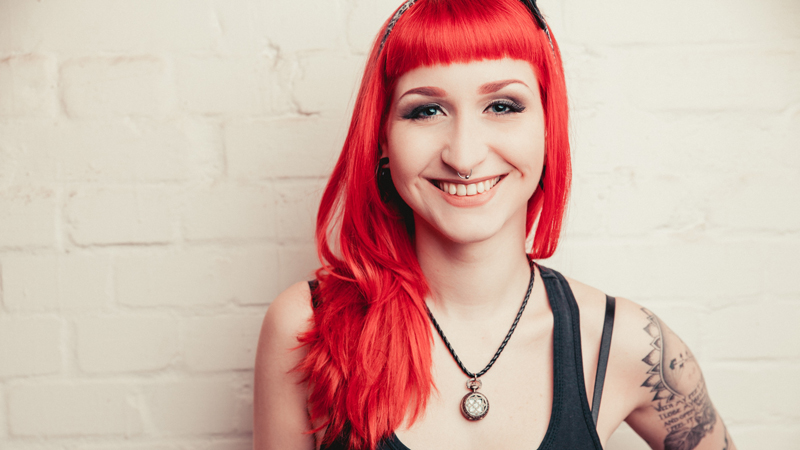 Prior to working at SBI, what was your background in music and audio?

I studied Sound Design and Music Composition at the Film University in Potsdam while working as an audio engineer recording bands and all sorts of audio content in the beginning. By the time I finished my master’s degree I was already working full-time in game audio.

Before joining SBI I have been freelancing as a composer and sound designer focussing on games for 4 years and collaborated with several Indie or mobile studios. The games ranged from simulators and apps to tower defense games like Happy Tuesday’s Hero Defense: Haunted Island - but none of them was an MMO, so entering SBI was a new and interesting challenge.

What was some of the earliest audio work you did on Albion Online? How has your process changed since then?

When I joined Sandbox in early 2017, a lot of the heavy lifting regarding the sound and music had already been done. Albion's audio design vision always had two opposing goals: getting the best sound possible while also having it work smoothly on different systems including mobile devices. I spend the first months fixing audio bugs, getting an overview of which parts of the game’s sound were not on par with the rest, and reworking them.

Sound and music are the most powerful tools to convey emotions, which are crucial for immersion

As we have been bringing in new content with every update, I’ve also been in charge of the audio for everything new. One of my first creations was the sound design and the voices for the Morgana Torturer - who I still enjoy encountering because he brought a fresh facet to the Morgana ranks. While reworking the audio of individual mobs is a fairly small and easy task that brings more variation and narrative to the game (and which is still ongoing, because some of our mobs deserve some more love from my side), my responsibilities and the size of the tasks I tackled grew bigger and bigger over the last two years. The first huge rework I did was a complete redesign and extension of all the physical weapons auto-attack and impact sounds. 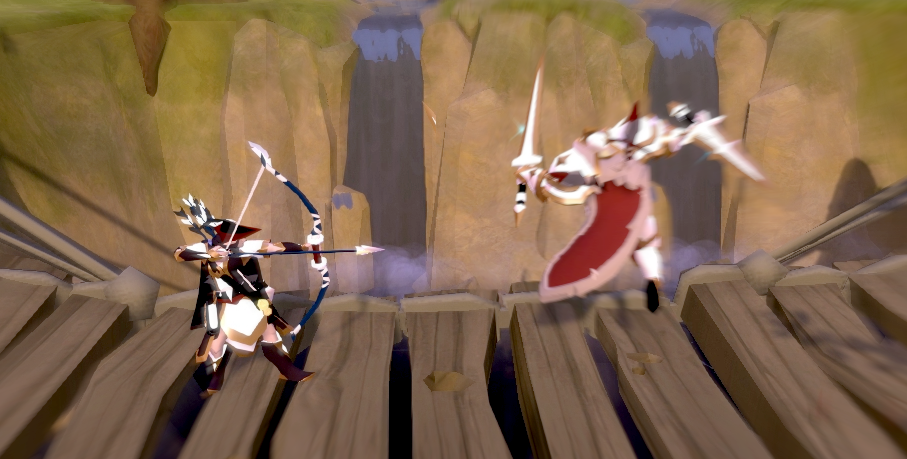 Back when we launched the game, we used a more general set of attack and impact sounds for all physical weapons. There were differences between weapon classes, like the bows having a different attack and impact than the melee weapons, but one could not hear a progression going from an Adept Weapon to an Elder Weapon – even though the size of the weapon almost doubled visually – and there was no big difference in sound whether a weapon cuts, pierces, or punches.

I wanted to give players a better feel of how heavy, fast or elegant their weapons are and enrich the fights with a greater variety of sounds. The new system has specific attack sounds tailored to the handling and damage of each weapon, as well as different sounds depending on their size, with uncommon weapons like the Grovekeeper having their own sound sets. Also there are now different types of impacts (blunt, pierce, cut, arrow and bolt) and different levels for each, and the timings of the sounds have been tailored to the animations – which was a system rework on its own.

There are a lot of other things that have been reworked since then, but there are also a lot of areas that still can and will be improved.

What is your general approach to audio design, and what specific steps do you take to make the game's sound feel more immersive?

Sound and music are the most powerful tools to convey emotions, which are crucial for immersion - so I look at every element and analyze what it really is about and how audio can help emphasize that.

Albion has a distinct style and story world and balances conveying the significance of every action with its own sense of humor. The audio supports this emotional range and helps to create a world that feels plausible and real, rich and interesting, and also reflects whether something is important or funny. Thus it can range from graveness to absurdity and has to be crafted deliberately.

An example of one end of this range and the power audio has is Conquerors Hall. I loved the idea to have an actual place where people have “physical” proof of their glorious deeds instead of a plain leaderboard. Its sole purpose is to honor the players’ achievements and thus the audio is solemn and all about creating a sense of awe. While the visuals are already impressive and beautiful, the sound helped to give it a feel of solitude but also a lightness, so it won’t seem like a graveyard. Without the music, it did not feel important though. So I also wrote a short piece of music to create a feeling of reverence.

Audio is usually supposed to go hand in hand with the visual design and animations used for certain characters, but it can also contrast or enhance the story world. You can go and ride into war on a powerful and elegant warhorse - or choose to mount a pig for whatever action you are up to - and while the horse needs to sound elegant and strong, the pig just sounds ridiculous (and cute). With the city NPCs, we took the chance to add more narration and character to Albion by adding voice-overs. We had lengthy discussions about each character, what they should say and with which attitude. I am very happy about how peculiar each of them turned out. We have the same discussions about every new mob and every rework on the existing mobs - to add narrative depth and variety to the story world. We are constantly working on enhancing those to make the game’s sound more immersive.

Because each player forges their own destiny in Albion, it is also important that every action they take feels like it matters. The audio supports that by adding “oomph” to their actions (with the degree of intensity linked to the severity of the action) to give the players a feeling of power and growth. Crafting, gathering or fighting all need to sound bold and satisfying, and when in combat, the weapon sounds should tell you its characteristics and intensities. E-spells are the most powerful, so they have to sound accordingly mighty compared to a Q-spell.

Do you have a favorite character, creature, or spell audio in the game?

Definitely! Of the City NPCs, I particularly love the Tanner and his mix of moroseness and offhand bad jokes. Being a tanner in a middle-age fantasy setting must be quite a challenge for the nose! But he is more than just a grumpy old dude and I always have to smile whenever I hear him cursing the flies, whilst walking past him. 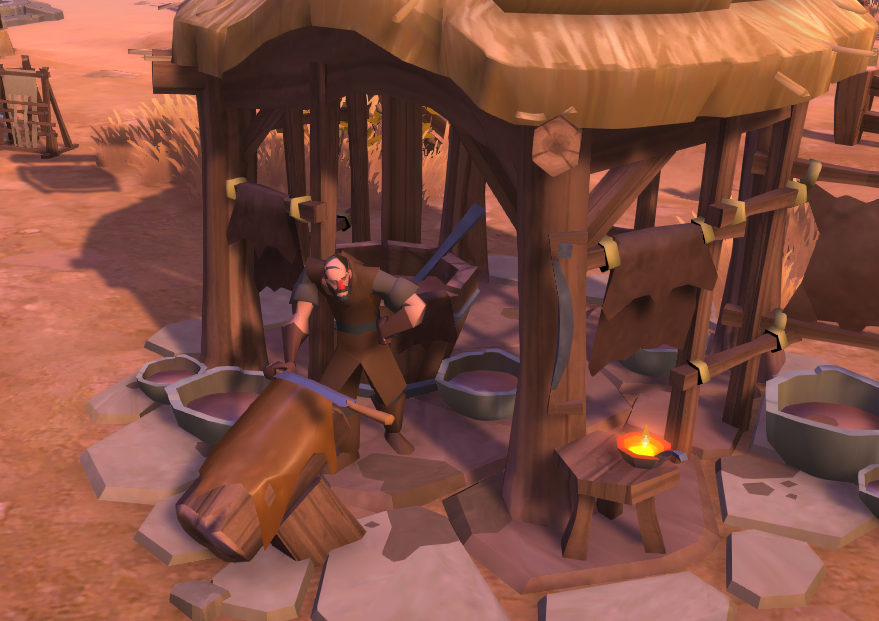 Another creature I really like is the ram mount. It was one of the first mounts with an enhanced sound set including its own speedboost and movement voice. The ram does not really like to be mounted, and as goats sound ridiculous when they scream… that’s what the ram does when it starts running.

You've also written music for some of the game's trailers and videos. Can you walk us through that process?

For the last 4 updates, I was responsible for the whole audio of the trailers, including the music. The update trailers have a certain workflow that is different from other videos we create, as we have a limited time span for their production between the content lock and the update release. This constraint defines our process. First, we decide on an overall concept and “story” for the trailer. Then I usually create different versions of music edits as temp tracks to align our vision regarding the mood and attitude we want to convey. This helps to establish a language and make sure that we all work toward the same tone.

Because each player forges their own destiny in Albion, it is also important that every action they take feels like it matters

As most of our trailers feature a voice, I often record a layout voice to get a rough feel for timings and so we can iterate on the text and timings too. When we have a proof of concept I either record our “Voice of Albion” Shaun in my studio or hire remote voice actors when we need different roles/characters to get the voice-overs done.

As soon as we have the final voices and settled for a temp version of the music, Our video editor starts recording video material and I start writing the music. I use the temp tracks we chose as a reference for speed, mood, and climax but always try not to get too close to them and make the trailer sound unique. Therefore I start with a similar tempo and then compose the key elements like rhythm, harmony, and melodies with the goals in mind that we set for the different sections of the trailer. Because of the musical style of Albion the instrumentation for the trailers is mostly orchestral yet digitally produced due to time restraints. 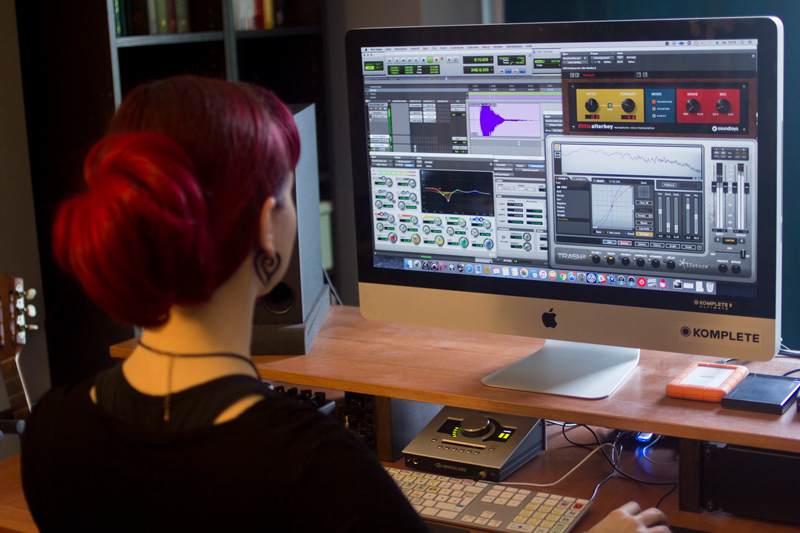 When I have a first rough-mixed version I send it over to the team and they iterate changes they want. As soon as the only change requests left are mixing issues, our editor starts to edit the video material to the music. We usually have a few iterations of the music, as well as the video edits. When the video is finished it lands on my table again, to create the sound design for the visuals and make a final mix of all audio layers.

While some voiceover actors work remotely, Shaun Lawton (profiled in a recent article) lives and works in Berlin. What is it like working with Shaun in the recording studio?

Shaun is a very kind and reliable person, which makes it a pleasure to work with him. As soon as you place a microphone in front of him he instantly delivers the warm and disarming narrator voice that shaped our trailers. We can then very quickly focus on nuances regarding the emotions within the stories and dynamics and speed. He has a distinct narrative style that transports a feeling of magic that I never heard in any other voice before - which makes my job as the engineer and director in that situation pretty easy.

When you play Albion, you will encounter several situations where you can hear my voice or those of my close friends. I also try to hide at least one of them in each trailer and so far I've succeeded. Want to be immortalized in a game? Keep your audio friends close!

Stay tuned for more Dev Spotlights in the coming weeks.