In our newest Dev Talk, Lino Claudius, User Interface Designer for Albion Online, discusses some of the major quality-of-life improvements coming with the Nimue update.

Nimue, the fifth major post-release content update for Albion Online, arrives on November 21. In out newest Dev Talk, Lino Claudius, User Interface Designer for the game, discusses some of the major quality-of-life changes coming with this update.

No time to watch the video? Read on for a summary of his talk:

The goal of the Party Finder is to bring more players into social groups, thereby providing easier access to the open world. We want to emphasize that this is not an automatic matchmaking system, but rather a lobby-based system similar to "custom game" features in other games.

There are two ways to use the Party Finder:

When creating a party, the leader generates a searchable party by giving specific parameters (activity, minimum IP, maximum group size, party description, etc.). Other players can see the party (like an open lobby) and view its details, such as the gear other members have equipped. They can then either apply or join automatically depending on the party's settings. Players who join successfully can then select potential roles to fill. 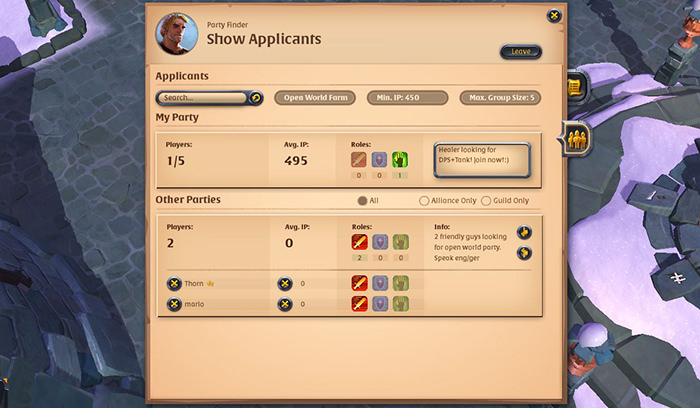 Additionally, there is a special function within the Party Finder for guilds and alliances which allows party leaders to restrict applications only to members of their own guild or alliance. This functionality can be used to quickly assemble a party that allies can join automatically without having to invite them one by one, instead allowing for more time in the open world.

Parties in the Open World

Visible Party Roles: The list of roles used in Expeditions and the Arena are now available in the open world. When forming a party, roles are automatically assigned based on gear, and can be overwritten or turned off as desired. This improves the visibility of key players like tanks or healers in parties, allowing for more streamlined open-world combat.

This also opens up future development potential to improve party play even more: for example, in a future update we may add different-colored dots on the minimap based on these roles.

Target Markers: With the Nimue update, party leaders will be able to mark mobs, enemy players, or friendly players with one of six different icons. These icons can be used in any open-world setting, and will only be visible to party members, allowing better communication during open-world PvE and ZvZ fights.

Minimap Ping: Minimap ping is now visible for all members of a party. In addition, it has received a visual overhaul: it’s now quicker, more visible on different backgrounds, and focuses on the target point instead of radiating outwards. In addition, we have implemented a hotkey to create a ping at your current position.

Based on popular demand, Silver transactions can now be tracked in the guild UI. While this system does not yet include taxes, it will immediately allow for better control of currency flow, particularly within larger guilds.

Other features coming with Nimue include:

That's all for today - thanks for watching, and you can expect to see additional Dev Talks in the coming weeks.