GvG Seasons and Invasions are a major feature addition coming to Albion Online with Kay on December 6. Have the ins and outs of this explained by our Game Director. You can find a detailed explanation, including a timetable for the first season, below the video.

What Are GvG Seasons?

You score season points for your Guild by holding resource territories and castles, or by raiding them away from other Guilds’ resource territories; and points get you fame (in the form of rankings, brackets, special recognition for first place, and general bragging rights) and fortune (in the form of special tokens that can be used to make/acquire all the cool things in this video And then a new season starts and you can do it all over again.

What is This Feature For?

We’re adding this feature to inject some additional long-term motivation and excitement into territorial warfare; to try and shake up the existing order of things; to give smaller groups a way to get a toe in the water; and to create a more interesting rhythm to this gameplay, with crescendos and calmer periods. Creating a seasonal ranking that resets every ~3 months or so, encourages active participation, and rewards good play with power and prestige, gives us a strong framework to meet these goals.

How Will it Work?

Probably the easiest way to explain this is by walking through the schedule for Season 1.

The season kicks off on the Saturday after Kay launches:

At five points throughout Saturday and into Sunday, batches of territories become claimable:

For this to work, claiming needs to take time and people, so in each of these territories, a new boss will spawn to defend it.

At the start of each resource territory’s primetime on December 10th (or 11th for the later territories), scoring is enabled for that territory.

Daily points are as follows:

Points are scored at the end of each territory’s primetime. They are generated by new NPCs that will populate your territories, called Siphoning Mages

Points that your Guild scores also immediately get you Siphoned Energy, which stockpile in a new section of the Guild UI, and can be withdrawn (and re-deposited) by Guild Masters and Right Hands.

No GvGs can be scheduled to happen between the start of the season and downtime on the 11th.

Once GvGs have started, things proceed as you’d expect:

Each castle is worth, over the course of the day, around 3x the value of a territory in the same area – if you can hold them for that long, of course.

A month in, we do a in-season reset. Afterwards, it plays out like the start of the season:

This is done to shake the status quo up a bit, do another open-world strength check, and provide some additional structure to the season.

The in-season reset plays out like the one before.  From this point on until the end of the season, all new points scored are doubled, so the final month is worth as much as the previous two combined. This stops a winner from being crowned too early, and gives a good reason to really push in the last month, so activity is biased towards the end of the season rather than the start.

Points scoring for the season ends for each territory at the end of its downtime on March 2nd/3rd, and GvGs can’t happen between this time and the end of the season.

At downtime on the 3rd, the season official ends, and victory-related stuffs happen.

Nota bene: this whole system is hanging off a very flexible event-scheduling system, so we have a lot of flexibility in how we set it up. Barring any major issues, the above will be how Season 1 runs, but we have a lot of options in terms of adjusting subsequent seasons to make them more interesting and fun. Season 1 is reasonably conservative in setup – once we see how you all use it in practice, we have the option to do more interesting things if they seem like a good idea. As mentioned above, you get Siphoned Energy for scoring points and killing Mages.

In Caerleon, there is a new NPC who will help you convert this energy into stuff that you might want. Energy can be converted into Runes, Souls and Relics (the latter of which are used to make L3 artifacts, among other things), or used in the crafting of battle mounts. You can (once again) see more info about these new items in this video.

The mounts in particular will require large amounts of Energy, to keep them rare and valuable.

Separate from these economic gains, there’s another big thing to fight for in Seasons: bragging rights.

As your Guild scores points throughout the season, it’ll climb the global season leaderboard – a new bit of UI where you can see how everyone’s doing relative to one another, or check past seasons to see their previous performance. As well as a global ranking position, you’ll also be able to progress up through a series of brackets: starting with Iron when you first start scoring points, and moving up into Bronze, Silver, Gold and finally Crystal.

Every time you reach a new bracket, you get a chunk of bonus Energy as a reward - and more importantly, everywhere your Guild logo shows up in the UI, the border will be colored to match your current bracket. Get into Gold, for example, and everyone will see your Guild shield in the UI with a shiny gold border.

Finally, the first-placed Guild in the last season will have their Guild logo shown on banners at strategic points in Caerleon until the end of the next season (when a new champion is crowned). Additionally, every time your Guild finishes first, it gains a crystal ornament above its Guild logo in the UI that it gets to keep forever – one, two and three crystal prongs to its crown, and then for any Guild winning four or more seasons, a big crystal displaying a number to count their many victories. 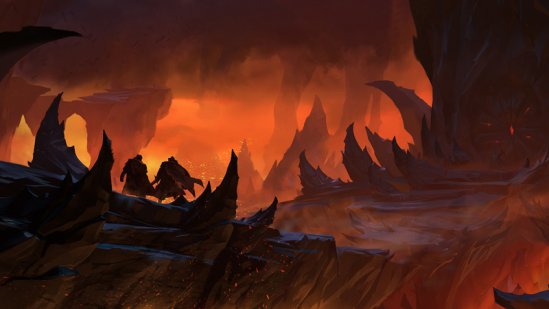 This week's patch updates rewards, matchmaking, and entry requirements for Hellgates, along wi...